Der Ampelmann in Berlin - a fun attraction for tourists 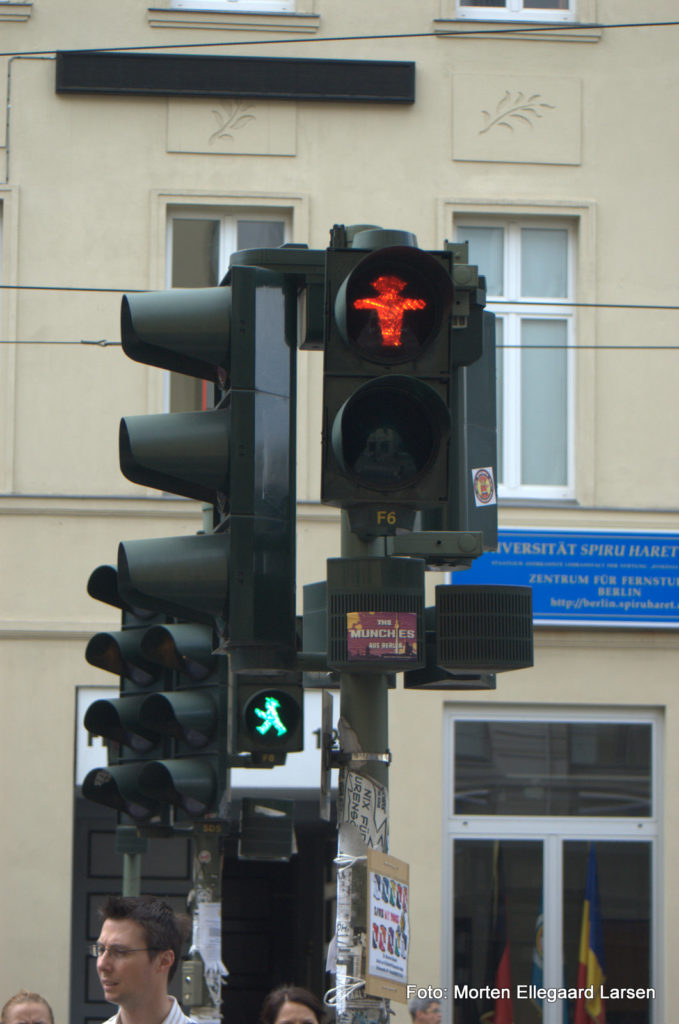 Ampelmann best experienced as a pedestrian on a city break, because then you see the city in a completely different way and here's a tip for seeing an attraction in Berlin that you probably wouldn't notice otherwise. In certain parts of this formerly divided city – the eastern part – you can see this special light at the pedestrian crossings.

Tourists on foot in Berlin will always see a little more. You look more at the city and the people in it, when on city breaks you move around between activities for tourists, sights or museums as a pedestrian. And in the area around the Wall you will be able to see a different light curve; with there Ampelmann.

We are used to seeing stylized figures in our traffic lights: red man - stop and green man - walk. They are a bit boring to look at, because they have to be easily recognizable no matter where you come from; it is not that simple in Berlin.

The red and green man does not look like anything you see elsewhere: the red version stands with his arms outstretched and legs together, there is no doubt that here you have to stop for the red man to block the road. The green is in rapid trot on its way forward, a quick stroll it seems; both of them are hated.

This figure is called 'the traffic light'and originates from the former East Berlin.

This little male character was introduced to the street scene in 1961 and is thus an older gentleman. He gradually became so popular that he was used as an icon for traffic education in the GDR, and the then Road Safety Council launched a campaign with people dressed as “the Amplemänchen ”- a campaign that won several international awards.

Ampelmann as icon for East Berlin

After the merger, it was intended that all these light signals should be replaced with the version found in the rest of Germany, because there must be uniformity in the signals - at least from a traffic safety point of view. But after many protests from East Berlin, they were allowed to keep 'der Ampelmann' and that is good. He is, in fact, significantly more charming than the normal version.

Der Ampelmann is also found in a few other German cities, also a few in the western part. And research suggests that the somewhat cuter Ampelmann actually works better than the sharp-edged Western version.

You can buy souvenirs in several places Ampelmann imprinted, especially in the eastern part of Berlin and around the Wall. And Ampelmann Berlin has even had an entire restaurant named after it: Ampelmann Restaurant and beach park.

In Odense, the idea has been adopted, so there you can now see figures from Hans Christian Andersen's adventures, direct the traffic in the green and red lights.